Social network has become the outlet for rants which can be shared with at least 500 odd friends and get little solace and peace. However there has to be little control on what and when to post. There were many social network crimes or cyber-crimes since the advent of Facebook , twitter, Myspace and many more social networking sites in to people’s lives.

Sometime in September 2011 a boy has put status message on FB stating he dumped his girlfriend. Immediately after that Malini Murmu an IIM Bangalore student committed suicide amid these FB messages! There are many more such cases which lead to family devastation like a boy informing her girlfriend that he is going to kill himself on FB and doing the same, a girl reporting every one that she is about to die, so on so forth. In daily news you will come across many such hard to believe crimes and suicides over the social network the reason for which is a subject of interest to psychiatrists. The impulse people face these days on facebook and other sites is unmatchable! Social media does assist the police to catch the criminals. Many people foolishly leave their footprints on social networking sites and it has become easy to catch the criminal.

The question is how much can the moral police stop crimes driven by emotional trauma? Will their laws be able to stop crime? Will this change the mind-set of people?

Everyone must be aware of the old news where two girls were arrested on the grounds of moral policing by the police of Thane station in Mumbai and just 9 days after that arrest one more guy was arrested on the same grounds!

A girl, Shaheen Dhadha posted on Facebook post Shiv sena leader Bal thackeray’s demise, the summary of which is “Do we really need to shut down the city “criticising the bandh in Palghar immediately after his death. Her friend Renu was also arrested for liking her post. As if it would stop the thinking process the police arrested them and after the uproar they finally closed the case saying there won’t be a charge sheet. 9 days after that incident, Sunil Vishwakarma a 19year old was arrested as he posted abusive comments on Raj Thackeray. Vishwakarma stated, his account has been hacked and he is not aware of such post! Now the question is did the arrest of Renu and Shaheen subside the actual crime? Everyone has an opinion on anything and everything and voicing it seems utmost important these days. Here I am totally not supporting the people who have put status updates, neither am I supporting the political supporters or police officers who traced the update and thought an arrest would resolve the issue. Freedom of expression and speech always have too many loopholes in India and to that matter anywhere in the world. Sometimes an anti-religious post may lead to a massacre too! The vandals have destroyed Shaheen’s uncle’s hospital even after her apology and also traumatised her.

Freedom of speech is actually not a welcoming act! I saw that many people posted anti thackarey comments that day. I wonder if police traced every such anti-politician or an anti-social post. If they do that daily they have to plan endless arrests and the cyber-crime cells will fall short once the victims are under arrest. May be they can build a moral police station and a sky scraper with prisons so as to accommodate each and every criminal!

I am glad government has at least taken an action against the khaps stating that their hasty arrest was uncalled for. 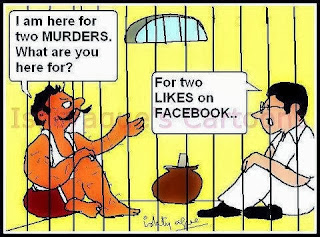 Above is a cartoon showing the silly arrests. This has been circulated on Facebook feverishly to oppose the arrest.

A PIL (Public Interest Litigation) was filed in Supreme Court challenging the IT act by a Delhi university law student Shreya Singhal. The vagueness of section 66(A) act which actually is a law against any electronic post which is gross, evil or menacing was questioned and Supreme Court sent a notice to centre,
Maharashtra, TN, WB, Delhi and Pondicherry govts over this petition. They asked Maharashtra to explain the arrest. I felt glad that there was at least some revolution against these meaningless arrests against the point of views. I agree with Shreya when she says there should be some safeguard against the acts but it should not be vague. To know more read and watch at http://ibnlive.in.com/news/outrage-over-fb-posts-arrests-led-me-to-file-pil-against-it-act-du-student/308261-3-244.html.

There should be an amendment of Section 66(A) of IT act or at least proper investigation and sensitisation before they arrest. Cartoonist Aseem Trivedi also filed the petition against the same law when he was allegedly arrested for his cartoons which show the corruption in India. He stole the lime light and entered the big boss season 6. So in a way the arrest helped him

Many months back even West Bengal CM Mamata Banerjee requested police to help her in tackling the cyber-crime as an anti- Mamata Cartoon was circulated over the net. Not only in India but also in other countries like UK and the USA, many arrests follow the social network posts!

Satirical and Iconoclastic or rude comments can be ignored about trivial issues. Banters or humours on serious issues can be tolerated even if it is painful or unacceptable but when these comments go out of hand and take some ones lives or disturb social harmony, a proper investigation has to be done and the poster’s previous records must be studied to know if this is the crime worth an arrest! I wish the government and the police concentrate on more serious crimes than a mere status update. They should use social networking sites in a more useful way and arrest the actual criminals who are pouncing on the peace of the nation. I wish they channelize their skills in that direction. However, I am not supporting the way youngsters use or misuse the social network. A politician himself or another celebrity may escape after posting an annoying view point on twitter or shouting openly in TV but it is tough to do the same for a common man!

The arrests just for expressing on social media are funny as there won’t be any chaos prior to the arrest. Cyber- bullying should definitely be stopped with necessary actions but a silly FB update should not be blown out of proportions in my opinion. After paying 15000/- cash and facing immense mental trauma the girls Shaheen and Renu were released and I still have no clue how the status is more intimidating than this arrest. I have not even read the full status update yet and I feel many have mental strength enough to stick to their own opinions irrespective of statuses!

Lastly I want to end the article wishing that a democratic law should be framed, for which people raise voice and law should be segregated from political groups. Simultaneously I want to suggest to the youngsters to be little cautious before dumping the personal rants which are of no use to anyone. Voice of Youth is definitely appreciated but not the personal life updates or any outrageous statuses .Protect your accounts from hacking. Keep changing your passwords. Do not put too much of personal information on facebook and other sites including your email ids and phone numbers. Be selective about whom and why you add. Safeguard yourself from being victimised online!