You are constantly in pain. The kind you can't describe in words. The kind you say is unbearable, unstoppable and has bothered you for at least three months to several years, every single day, every single minute. The only change is the amount of pain in different areas of the body. Yeah it is chronic pain but there are a lot many other things that are bothering you. Like the unexplained fever that stays on for months. Then you keep forgetting things. You experience fatigue most of the time as if some unknown power has snatched away all your energy and most definitely affected your quality of life.

If you are experiencing most of the above and possibly much more, it's about time you rush to a good rheumatologist and get yourself checked for Fibromyalgia. Though I hope that you do not have it! I have Fibromyalgia for almost four years now and I had no one to tell me there is an Invisible Illness like this [yes, due to its nature, Fibromyalgia is actually known as Invisible Illness]. So I had to go through  a series of misdiagnosis, misunderstandings and misinterpretations that hurt me more than this 24x7 pain.
But now I have learnt to live with it and ensure that it does not consume me. Raising awareness about the fibromyalgia and helping out the sufferers with information and tips has become the main purpose of my life.

And so, I am so thankful to Chetan of Half Baked Voices to give me this opportunity to talk about the condition.

Several countries / states have listed Fibromyalgia a disability, in India we have a long way to go.
So what is Fibromyalgia?
Fibromyalgia (FM or FMS) is defined as a chronic disorder characterised by widespread musculo-skeletal pain, fatigue and tenderness in localised areas. People with FM have a supersensitive Central Nervous System and researchers associate it with an imbalance in brain chemicals called neurotransmitters. That's the reason why a tap on the shoulder might feel like a blow to an FM patient.

People with Fibromyalgia experience excruciating pain in at least 11 of the 18 tender points as shown in the image here. 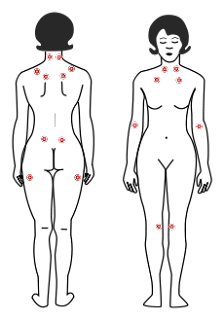 Symptoms:
In addition to the 24x7 pain, there are a lot many symptoms like fibro fog (cognitive dysfunction), morning stiffness, depression, anxiety, hypersensitivity to light, heat and sound, chronic fatigue, sleep disorders, reduced ability to exercise... to name a few.
How does Fibromyalgia alter life?
·         Many people are unable to work full time or even part time.
·         Household chores become a challenge.
·         Travelling becomes very difficult.
·         Memory problems affect work and personal life.

The best part about Fibromyalgia is also the worst thing about it. We do not look sick. Hence, no one believes that we are suffering, especially as there is hardly any awareness about it in India. So the purpose of this post is three-fold:

1.       Early diagnosis and treatment: If you or anyone you know has the symptoms.

2.       Awareness: So that every person with fibromyalgia does not have to explain the condition every time anyone asks, "So you say you are sick, but what exactly is your problem?" I used to say 'back pain' all the time earlier, but then it only created more problems. How could I explain at work that my fingers are just not helping me type today or that I am just unable to stand or walk today?

3.       Acceptance: People with fibromyalgia deal with umpteen symptoms on a daily basis. The support of family, friends and colleagues is of utmost importance. But the problem is that since people do not know about the condition, they do not believe the patients.

The symptoms are aplenty, the main cause of Fibromyalgia is still unknown and there is no solid cure yet. People with Fibromyalgia are surviving each day with some painkillers [that hardly help] or medicines that act on nerves plus the support of online communities. It's about time the condition comes in light and something is done to help the patients improve their quality of life. Do join me in the smallest step to help raise awareness - by reading, talking and sharing information about Fibromyalgia.

Anuradha
Posted by Unknown at 12:53